Run by Miss Churn, Miss Anstiss, Mrs Springett and Miss Green for year 5 & 6 only. Playing matches through out the county.

On Saturday 27th April, STOKENCHURCH Primary B team travelled to Kingsmead to play in a netball tournament. We played 10 matches, playing each team twice. The teams we played were Downley B, Downley C, St Johns B, St Pauls B and Hamilton B. We won 9 games and drew once against Downley B. After a great team effort by all, we came 1st and won the tournament! Well done to all the team. We would like to thank Mrs Hobbs, Mrs Springett, Coach Lisa and the umpires, Mr Stevens and Miss Churn for coming along to support us.

On 30th April, both A and B teams travelled to Lacey Green to play a netball match against St John’s. The match started and finished off well which lead to a score of 12-0 to Stokenchurch B team.

On 2nd May, STOKENCHURCH A and B teams travelled to play another game, in Wooburn Green, against St Paul’s. It ended with another win for STOKENCHURCH B team, the final score was 8-3. STOKENCHURCH B team would like to thank Mrs Springett, Mrs Hobbs, Coach Lisa, Amy Berrell and the umpires.

Leagues complete and final results in, this is the final netball update for the year. Triumphantly, the B team have placed first in their league, winning all matches that they played. In addition to this, the A team experienced similar triumph, placing joint second with St. Paul's. Hamilton received first place for our group and the girls, the other netball staff and I send them our congratulations! It is such a pleasure to watch the girls play so competitively, yet supportively against other teams. Once again, a huge congratulations on both teams' successes this year! I would also like to take this opportunity, on behalf of the netball staff and the team, to thank Lisa Anstiss for her ongoing, voluntary support of our netball team. She provides such expert training and support, and without her willingness to step into umpiring roles (in addition to taking on other roles) when needed, matches and tournaments may not be possible.

Another successful season is drawing to a close for our talented netball team. Back in March, both A and B teams represented the school at the HWDJNA tournament, demonstrating just what resilient, fair and tenacious team players they have developed into over the course of the year. The A team was rewarded with third place for their group and the B team with first place for theirs! In addition to these achievements, the teams have also been participating in matches for their respective leagues. Once again, both teams have experienced numerous successes and match wins throughout the season. Needless to say, myself and the other coaches could not be more proud of the progress and achievements that the girls have been rewarded with due to their ongoing endeavour and sporting spirit. We now await the final league results and we wish the girls the very best of luck. Congratulations on what has been a hugely enjoyable year! Miss Churn, Miss Green, Mrs. Springett and Lisa Anstiss

On a drizzly Saturday in November, the Stokenchurch A and B netball teams attended the High Wycombe District Junior Netball Association Tournament. The day is non-stop and the girls barely had time to catch their breath between matches, but we are incredibly proud of how they represented themselves and the school. For many of the girls, it was their first experience of competitive play, and in many cases they were playing against much more experienced players. Additionally, our B team was entered into the A team pool! The B team came a very impressive 8th and had a wonderfully positive attitude about their experience. The A team came a fantastic 3rd, again with this being many of the girls' first experiences of the demands of such a fast paced tournament. The staff and our coach (Lisa Anstiss) are very proud of you all girls. We could not ask for a better team to represent our school. League matches will begin in the Spring term and we will also be attending the March HWDJNA Tournament. I am sure you will join us in wishing the teams the best of luck in these upcoming events. Miss Churn 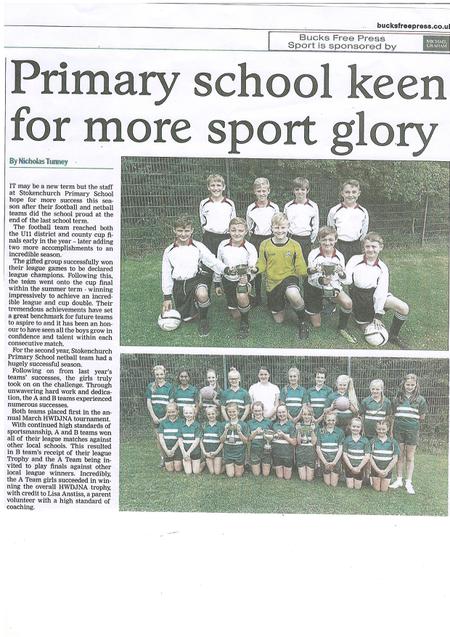 As we near the end of the netball season, I would like to wish all the girls a huge congratulations on their incredible efforts and numerous successes within their respective leagues. Both A and B teams have won all the matches they have played against other schools - a superb follow up to their success at the March HWDJNA tournament! Needless to say, all the coaches are thrilled, as are the girls. This puts both teams in a great position to (hopefully) win their leagues! The scores are in and we now patiently await the verdict. Should A Team win their league, they will be invited to play-offs in June against the winning teams from other local leagues. We wish you the best of luck girls, and we are very proud of you all.

Our Netball A & B teams both won their groups at the tournament on Saturday! 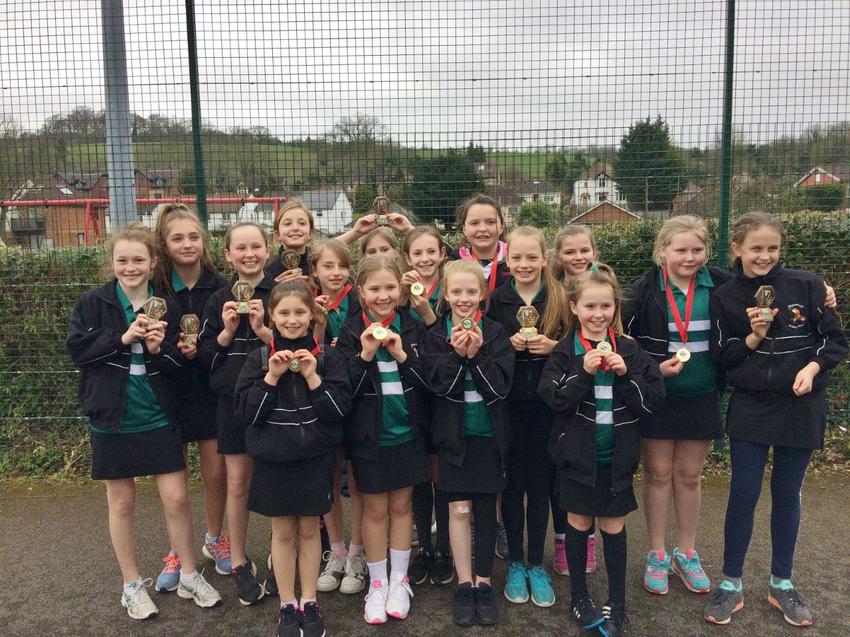 What a fantastic season for our Netball teams.

Our A and B Netball team won their Bucks Netball Leagues.

The A team then went on to win the Bucks League Playoffs and they are now the Wycombe and District League Champions.

A huge WELL DONE to both teams. 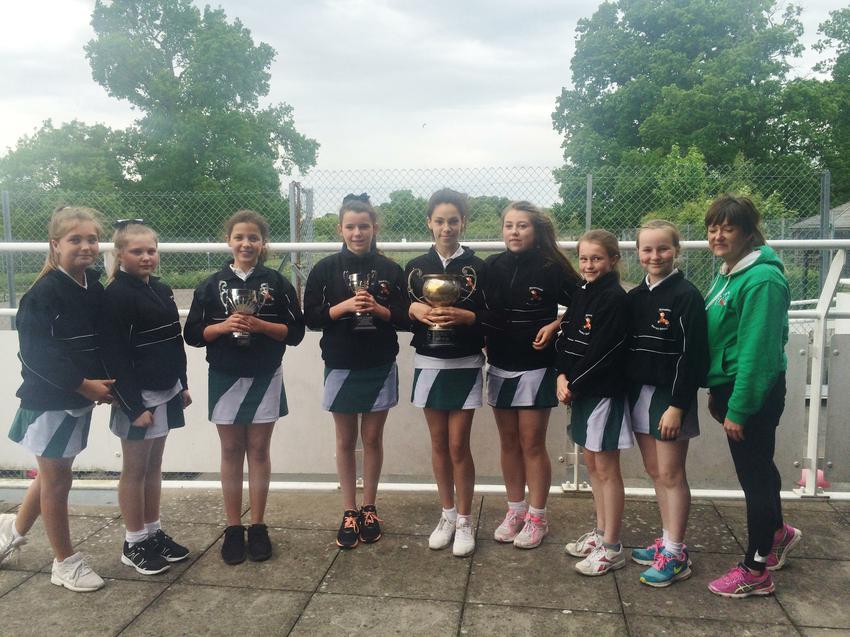 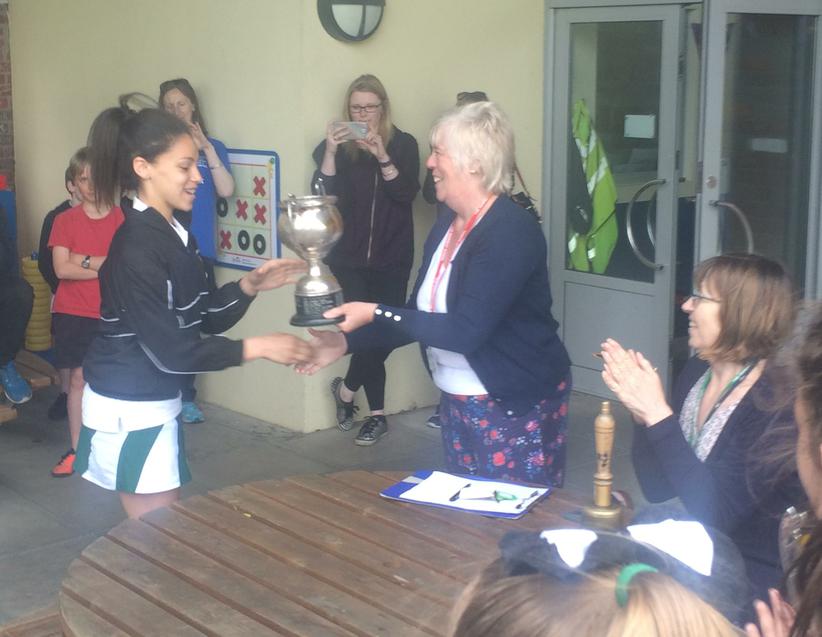 In addition to both teams placing 1st, the girls have been awarded the Fair Play Trophy for their Sportsmanship throughout the tournament.

We are extremely proud of our netball teams. Well Done girls !

The Fair Play Trophy can be seen in our trophy cabinet in the schools main reception area.

Match details, attendance authorisation slips and directions to away matches will be sent home near to the date of each match.

We will require referees for all matches any offers of help are greatly appreciated, also we may require help transporting the girls to & from the away matches.